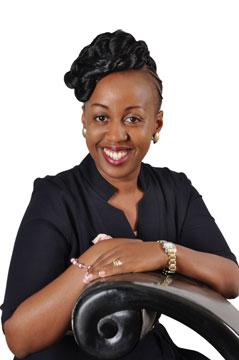 In 2018, women in Kenya still have limited access to education, employment and land. Crucially, women are still generally underrepresented in decision-making positions. In 2017, women made up just 21% of the National Assembly and Senate, meaning Kenya is falling short of its own constitutional requirement of 33%.

The situation is, however, gradually improving. In 2010 a new progressive, rights-based constitution came into effect. These new rules provide the legal framework for the government to fulfil basic rights, and for marginalized and vulnerable groups to claim theirs. This new constitution marked a new beginning for gender equality in Kenya, and in the past eight years has attempted to transform the almost institutionalized exclusion of women, to promote their full involvement in all aspects of growth and development.

Alongside the constitutional progress, it’s the people of Kenya who are raising morale and helping to shape the attitude of women who feel discouraged by the challenging society they live in. One of these inspirational people is Patricia Murugami. Patricia describes herself as a ‘Leadership Influencer and Change Catalyst’, and she embodies this on a daily basis. Patricia uses her life experience, genuine passion for helping people and true motivation to better herself and the people around her to mentor and support women in Kenya.

What are Patricia’s Credentials?

Patricia Murugami recently completed her Doctor of Business Administration (DBA) at the International School of Management (ISM). To complete her DBA at ISM, Patricia attended classes in Paris, NYC and Cape Town. She studied for her DBA alongside being Advisor to the Dean, Certified Transformational Executive Coach & Senior Faculty Member at Strathmore Business School, as well as the Vice Dean – Executive Talent Development. Prior to her DBA, Patricia earned her MBA in Strategy and Marketing from the University of Nairobi. Talking at a Tedx conference in Barcelona in April 2018 is also among her list of recent achievements.

Patricia’s doctoral research focused on identifying major obstacles women face on their path to becoming transformational leaders. Part of this research considered whether these barriers can become catalysts. It became apparent to Patricia that she may need to look at impediments as a potential for growth. She posed the question: how do you change a barrier into a catalyst? This research helped to solidify her G=RH4 growth formula – a framework to help transform leaders on four dimensions.

What is Patricia’s Leadership Formula and what Makes It Different?

Daniel Kahneman, a Princeton University psychologist who won the Nobel Memorial Prize in Economic Sciences, has played a big part in Patricia’s journey. His research demonstrated that human beings make decisions first for emotional reasons, and then for rational reasons. This ground-breaking research solidified her notion that leading with the heart and head are critical competencies of an effective leader, and in effect helped to solidify her formula. The idea behind the formula is to help both men and women attain integrated, and authentic growth.

For an effective leader, raising other people is critical to achieving a lasting, positive impact. H4 refers to the four dimensions that are raised to help leaders have an integrated and wise leadership impact. These four dimensions are: your Heart (into self-awareness both professionally and personally so as to become courageous and emotionally intelligent), Head (investing in intellectual abilities), Hand (contributing your time and talents and lifting others up) and Higher Purpose (developing and listening to your conscience so as to respond your calling.)

By simplifying the complexities of life into an actionable and straightforward formula, she is helping women and men make small, consistent steps to achieve noticeable changes in their lives. Patricia is adamant that the success of this formula shouldn’t be measured on the amount of money or other tangible results made from accomplishments. She hopes that her formula’s success can be measured by growth of character, as she believes this is where the real power comes from.

How did Patricia Get Started?

Patricia’s journey into leadership began while working in finance. And it was while working as an auditor that she became aware of the male-dominated nature of the finance world. Patricia started investigating the high potential of women in the organizations she was working in – many of whom weren’t getting their voices heard, and weren’t progressing in an integrated way and in roles they had been given.

Since then, Patricia has channeled her personal experiences into single-handedly launching 15 leadership programs for women all of which aim to inspire and elevate women, professionally and personally. She has also driven the growth of another 10 leadership programs across East, West and Southern Africa.

She has set out to flip the idea of leadership on its head: she wants to change the idea that leadership comes with a rank and a rigid hierarchy. She believes leadership starts with self-leadership: “When we know how to manage and lead ourselves, we earn the right to lead others. Leadership without knowing ourselves can be hard.”

Patricia believes in “lifting each other up”, and this is not limited exclusively to women. Alongside her studies, a full-time job, and being a mother to her two daughters, she also runs a consulting practice called Breakthrough Consulting Solutions Group and hosts a YouTube channel which fosters growth across the 4 Ls: Life, Love, Leadership, Legacy.

As part of her consulting work, Patricia runs a mentorship circle similar to the ‘Lean In’ circle in Sheryl Sandberg’s best-selling book of the same name. This is the kind of work that excites Patricia. Members of these circles often report back on how insightful the experience can be, saying they have started to become more courageous in the things they believe in, beyond the mentorship circles. Thanks to Patricia’s support, they find the courage to have courageous conversations with superiors about the work-life balance issues that affect their day-to-day lives. In these situations, adopting the G=RH4 formula and ‘raising your heart’ really pays off.

Patricia is an inspiration to many, but she admits she owes a lot to the role models, mentors and other inspiring figures in her own life. Among them are her parents, who were instrumental in teaching her values, virtue, how to think and how to work. Writers have also made a big difference in her life – one of the main examples being St Josemaria Escriva, who inspires Patricia on many levels. Dr Brené Brown is another important figure for her. Patricia’s husband, children, and extended family are critical sources of inspiration to become a better person.

Patricia practices what she preaches, too. She is currently ‘raising her head’ by challenging herself to read more and, as a result, learn more. She has set out to read 50 books in 2018, and she strongly believes that “Leaders who don’t read can’t lead.”

Patricia is of the belief that you don’t necessarily have to take giant leaps in order to become an effective and authentic leader. She trusts in small habits and steps that can be incorporated into a daily routine can make the big difference if they are properly adopted and repeated consistently.

ISM is proud to announce the winners of the Teaching Excellence Award for the 2020-2021 academic year: Professors Teck Eng and…

ISM Professor Ken Wong recently published a new textbook titled ”Omni-Channel Retailing: A Strategy for Retailers to Thrive in the…